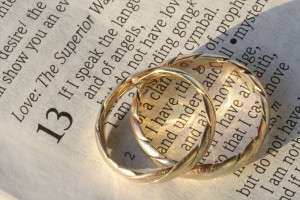 As my children approach marriage, my eldest daughter will be married this week, I finalize my short paper on marriage. It is my hope that all of my children will have healthy marriages. Most of all I want my children to move forward in relationships that are committed in service to Christ, there is no greater calling. I imagine there is nothing in this writing that is new or exceptional. This is a subject that has been at the core of a man’s walk with God since Adam (unless the man was celibate). It is my hope to properly understand this subject to make my home the place God wants it to be and pass this on to my children. A place he can use for his work.

I was challenged by a friend to start with the gospel and then apply these thoughts, teachings, and interpretations in the context of the gospel. It is very true that Christ bridging the gap between sinful man and a righteous creator is simply the most important event in human history. Christ’s sacrifice of his life and the restoration of our relationship with God is the ultimate expression of love. Everything points back to there.

In the past I have defined authority in terms of leadership styles. My titles for these are the shepherd, one who leads through encouragement. The bully, one who forces others to bend to his desires. The king, one who wants good for others but demands unquestioning obedience. And the dictator, one who demands blind obedience without concern for anyone’s well being but their own. The visionary, one who forges ahead and leads by example. I have always thought of Godly leadership being a composite of the shepherd, king and visionary. I have come to realize that the king role is only for God and Christ in our lives and there is no place in his kingdom for this style of leadership. In public I never would admit the desire to be a king, but I confess that it is a temptation. I think it is for many men.

First and foremost I want to establish that the foundation of God’s kingdom is love. God is described as love(1 John 4:8). The greatest commandment is to love(Mark 12:30). The second greatest commandment is to love(Mark 12:31). The foundation of his kingdom is not his authority. His authority in our lives springs out of his love for us. We were bought with a price, his son(1 Corinthians 7:23). He did not sacrifice his son for us out of his authority over us(John 3:16). The bible is a book of love, and you can see this clearly as you read it(John 1:1).

When you read the account of creation in Genesis 1 and 2 it strikes me that God is clearly enjoying the process and cares for the happiness of his creation. He desires for man to not be alone and creates a companion for him (Genesis 2:18). As is almost universally translated in English, a helper. I think the tone of this passage is very important as we evaluate the relationship between husband and wife. God did not create a servant, man did not rule over her. He created a helper, an individual with the gifting to voluntarily help with the tasks God laid before man. I believe this type of relationship is what God originally intended and intends for his children.

After sin enters the world, God tells the woman that she will desire to control her husband and the man will rule over her (Genesis 3:16). I think it is important here to note that these are consequences of sin, the very sin that Christ died for on the cross. This was a consequence to direct her toward repentance and ultimately recovery of relationship with God. I think there are two reasonable approaches to this passage and both lead to the same place. The first is that because of her sin, God decreed that she will be the servant of her husband. I know this is an interpretation held to by many, and I think a fairly harsh one. I do not see this as consistent with the character of God. He does not force us to follow him, why would he force us into a subservient relationship. Even if we hold this is true, then is not the sin of the woman forgiven at the cross? Is this not a part of the freedom of the gospel?

The other interpretation is that these are descriptions of temptations and failings that men and women will have throughout the ages. It is widely accepted that women struggle with the desire to control their husbands (I know some men that fall into this as well). I believe men are tempted to desire to rule over their wives. Power is intoxicating. Having your own God ordained servant is also appealing to our carnal nature. I believe the desire to rule over your wife is a temptation to be fought, not a right to be claimed. I believe this is born out when leadership qualifications are described in 1 Timothy 3:4, 5 where a man is expected to manage his children, his wife is specifically not mentioned in a passage that is often used to subjugate women. (1 Timothy 2:11, 12)

I have felt led to read the passages in the rest of the bible that discuss marriage in the context of what I just discussed. The gospel, the traits of a true leader, the love based foundation of God’s kingdom, and the original intent of the husband/wife relationship. In this context Ephesians 5 and 1 Peter 3 become very clear. We have a high standard to strive for, a very high standard.

Before we look through these passages, we should define authority. Merriam Webster defines authority in this context as:

The power to influence or command thought, opinion, or behavior.

Frankly I do not see how these apply in marriage. Authority is an expression of power. God has not given us power to hold over each other in marriage. The biblical passages on marriage do not express a command that husbands force their wives to do anything. In every passage it speaks to how the husband should view and treat the wife and vice versa.

The picture God gave me of marriage many years ago has been powerful for me. The picture is of a man holding up a large umbrella of spiritual protection against the storm of the world. The wife is supporting the mans arms. Without the wife, the husband cannot stand. Without the husband, the wife is unprotected. Together they forge a safe place in a harsh world for children to grow. This analogy continues to work as it applies to children. When children leave the spiritual protection of their parents they struggle against the world alone. The picture to me is a valuable one and does not hold any form of “authority” within it.

Conversely to this let us look at the definition of submission. Submission is defined as:

The condition of being submissive, humble, or compliant.

I like the way Michael Peters put it recently.

Submission is a voluntary and purposeful expression of support.

The pattern we see in our relationship with God is submission. He does not force himself upon us, he does not force us to accept Christ. We choose how he rules in our life. We are called to be in mutual submission to one another also. It is surprising to me that scholars would assume anything different in marriage. Marriage is compared to the church as the bride of Christ (Ephesians 5:24-25), both relationships are a life long choice of submission.

This passage is clear, the husband should follow the example of Christ in serving his wife. Jesus came to live among us and die for us to reconcile us to the Father. He did all of this without forcing anyone to do anything. The disciples were all volunteers who followed him of their own volition. Husbands carry a responsibility to willingly serve their wife the same way.

Wives are called to voluntarily submit to their husbands “as” to the Lord. This is not blindly following, this is jointly seeking God’s will. The point is to follow God, not the husband. I think Paul is very clear about this.

This passage appears to me to be addressing the controlling temptation that women are susceptible to according the passage in Genesis. Verse 3-6 are a textbook “lead by example” description of how to handle a difficult situation. These principles can apply to many relational situations but the key to this passage I believe is in Verse 7.

Likewise, all of you husbands, dwell with them according to knowledge, giving honor to the wife, as unto the weaker vessel, and as being heirs together of the grace of life; that your prayers be not hindered.

What could be worse than having your prayers ignored by your creator. Husbands are called to not give grudging consideration to their wives. They are called to give honor to their wives. Honoring someone is done out of a team based relationship “being heirs together of the grace of life”. This is not akin to a boss acknowledging a subordinate.

My desire is for my children, friends, relatives to all know the joy of a healthy marriage. In order for this to happen men have to let go of their desire to dominate and walk independently. It is hard to understand each others needs, dreams, desires and hopes. It is not something that comes naturally to men, but we are required to do this. Women have trouble not fighting for control and independence. Women are not called to blindly subject themselves to hardship but to proactively and voluntarily support and encourage their husband. If both a husband and wife are mutually submitted to one another, dead to themselves, and earnestly seeking God, then the true beauty of marriage can be present in the way God planned.