Tax Finance Commission fails to recommend project, but aldermen have votes to override that decision

The failure of the Shrewsbury Tax Increment Financing (TIF) Commission to make a decision on the long-pending plan to build a Walmart Supercenter on the grounds of the derelict Kenrick Plaza has set the stage for a big vote Jan. 23 by the board of aldermen. 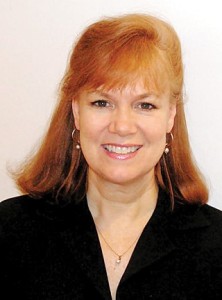 Shrewsbury Mayor Felicity Buckley said that developments, much like the proposed Walmart in her city, have had positive economic impacts in surrounding communities.

The commission, at a special meeting Jan. 9 at city hall, deadlocked 6-6 on a resolution to approve the redevelopment plan. The 12-member panel was recommissioned by the board of aldermen in October – after a year-long hibernation – for the express purpose of forming a recommendation on the Kenrick redevelopment project.

A slide show presentation by representatives of developer G.J. Grewe Inc. led off the meeting, followed by about an hour-and-a-half of comments from the approximately 200 citizens who had flooded the city hall ballroom for the public hearing. Before voting, the commission adopted a series of amendments read by Affton School District representatives, asking that the district share in any new property taxes generated by the project.

Normally, incremental property tax revenue from a TIF project is reserved for retiring bonds issued to finance the redevelopment.

The Affton amendments apparently made the resolution acceptable to three commission members, as the vote on the amended resolution was knotted 6-6, whereas the original, unamended version of the resolution failed, 3-9.

An ordinance granting the special use permit is scheduled to be on the agenda of the board’s end-of-the-month work session. The board customarily meets on Tuesday nights, but bumped back its second January meeting to Wednesday the 26th because state law requires boards to wait at least 14 days after the final vote of a TIF commission before approving its recommendation, Mayor Felicity Buckley explained.

In failing to decide on the redevelopment issue, the TIF commission ended its brief career, but its tie vote reflected the deep division among the citizens who addressed the public hearing.

Most speakers opposed the plan, some emotionally denouncing the state TIF law in general, and the Walmart plan in particular, as a tax give-away scheme benefitting wealthy corporations at the expense of ordinary citizens.

Proponents of the proposal argued with equal force – despite jeers and catcalls – that whatever theoretical problems there might be, the Walmart TIF was Shrewsbury’s best chance to reverse chronic shortfalls in tax revenues.

“What we have over there now is a drain on our city,” said Kurt Odenwald, Shrewsbury resident and former St. Louis County Council member. “TIFs – I don’t like them, but it is the state law…and other communities use them.

“We’re not talking about new development – we’re talking about redevelopment and we’re not going to get it without TIF,” Odenwald added. “We are somewhat at the mercy of who’s willing to come in and develop. The financial community, the business community doesn’t want to come in – Walmart does,” Odenwald told the crowd, to a round of boo’s.

Dee Wiecher, board member for Ward 2, which includes Kenrick Plaza, voiced opposition. While originally in favor of the proposal, Wiecher said after some research she discovered that “TIFs do not do what they’re intended to do.

“TIFs move retail establishments from one community to another, leaving empty spaces and dilapidated buildings. They benefit municipalities for a while, and then they leave municipalities in poorer position than they were before,” Wiecher said. “All the while, school districts and other entities lose out on any increase in property tax revenues. They are left with property tax rates of the so-called blighted condition.”

When interviewed later, Wiecher said she opposes all use of tax increment financing for retail projects and will oppose the Walmart project when the board votes. Meanwhile, attempts to reach other members of the board, as well as Mayor Buckley, have been unsuccessful. No one but Wiecher answered his or her phone in four rounds of calling over two days.

Wiecher said the silence probably indicates that her fellow board members favor the redevelopment proposal.

“Otherwise they would answer their phones,” she said.

After the TIF commission meeting, Buckley suggested the proposal has the support of the majority of board members, and will pass despite the commission’s failure to make a recommendation.

Buckley said her own view is that Shrewsbury “as an inner-ring city, (should) look to our neighbors to the north, both Brentwood and Maplewood, to see the very powerful positive economic impact that these types of projects have created. I look forward to seeing that happen in this community.”