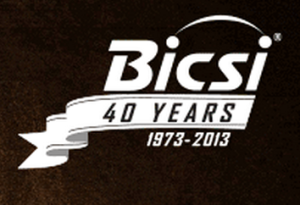 eading back from Bicsi 2013 held in Tampa, Florida. It was a really good conference and I have renewed confidence in Bicsi as an organization. This was our fortieth anniversary national conference, and the staff did a great job without going over the top. I have been a member since 1994 and received my RCDD in 1996. I am looking forward to staying involved with the organization for the remainder of my career.

I wanted to focus on a couple of major themes that literally came clear to me just this week. I believe I can use what I learned to better anticipate technology changes and thereby benefit my customers, colleagues and family. Often we look at a technology in its own bubble and evaluate it based on various stimuli to predict what will happen. If we look at the entire technology stack leading up to the technology in question then we get a much clearer picture. This can help us anticipate change and the direction from which solutions will come. This information is useful for many purposes including, design guidance, product selection, vendor selection, and even investment.

As a very simple example, wireless up until 802.11AC was always slower than the mainstream wired network. This was due to limitations within the wireless tech of the day. Lets look at the specific mainstream wireless vs. wired speeds at different points in time.

If we simply looked at the past we would assume 10 Gb ethernet would be mainstream in the LAN by 2016 but there are some very specific technological hurdles before that can happen. There is simply also a lack of demand, 1 Gb Ethernet is enough for almost all users. At the same time the push for wireless speed has continued unabated. New technologies like MIMO (multiple-input and multiple output) allowing multiple paths and antennas, beamforming to improve reception around obstacles, and DAS (Distributed Antenna Systems) to overcome wireless limitations, have really allowed wireless to blossom. I think we are headed into a period where wireless speeds will stay consistent with wired speeds. This will be the case until the demand for 10 Gb leaves the data center and pushes to the desktop user.

Other pressures will continue to push wireless as well. We are now in the post pc era and very few devices even come equipped with an RJ45. In my opinion, most businesses on their next move or rewire should forgo a lot of the typical wiring and implement a dense and powerful wireless infrastructure instead. BYOD (Bring Your Own Device) and tablets are here to stay, it is better to not fight it. Today, many people use their smartphones and tablets as an extension of themselves. I spend more of my computing day on these devices than my traditional Windows laptop. As an aside, technologies like device based payments via NFC (Near Field Communication) could be a real boon for the progressive retailer, I think this next year will see this technology launch strongly.

Another truth about the industry was reinforced for me as well. This business is cyclical, not because of trends and preferences but because of very real physics. A prime example of this is how we overcome physical limitations and bandwidth constraints. If a wire can only carry speed X and we need more, then we add a second wire and bond the channels. We do this to gain 2X, 3X etc speeds. Eventually the next cable is available that will run 10X and then we are happy until we need to start bonding channels again. This cycle goes back to the original 64k data circuit which got bonded into a T1 and continues today in bonding multiple 10 Gb channels in the data center.

There are other examples but the lesson here is simple. We need to look at the current state of a technology in the context of the physical limitations it bumps against and the historical approach to compensating for that. We are staying within these bounds as an industry. Otherwise we would not still be stringing the cheapest wire possible (twisted pair) to run an inefficient protocol (ethernet) at greater and greater speeds. I have been scratching my head ever since the death of ATM, a technology designed to move multimedia, which was killed by ethernet. Our industry may not always make the sane choice but I think we are rather predictable.