It is finally time for the next “Who Invented?” installment. This time we will be looking at the history and origin of the Smartwatch. The wearable technology sector is a heavy point of innovation right now partially because of my generation. You can read the previous articles in this series here:

Who really invented the Smartphone?

Who invented the tablet? 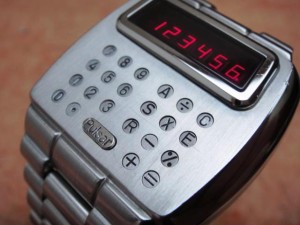 The Smartwatch is really the odd artifact of my generation. It will be interesting to see if it can carve a permanent place in the tech arsenal of  the average adult in the coming years. If it can, then we can expect to see a lot of very interesting developments in the next ten years. I think most of our fascination with this form factor comes from the original marketing of the calculator watch as a Smartwatch. There were many attempts to make intelligent watches that were intended to be true computers as far back as the 1980’s but these were more prototypes than actual products. The calculator watch was what truly impacted us. Pulsar came out with the first model in 1975. It was the beginning of of a genre that still lingers today in department stores around the world. It amazes me that you can still buy the Casio calculator watch for $24.99 at Target today.

My first Smartwatch was a Casio CFX-400 Scientific Calculator. I remember going to the local Kmart to buy it with one of my hard earned paychecks. I spent hours entering information, doing my math homework, converting currencies and generally geeking out. The effort required would be unthinkable in devices today. Especially in the early versions, you were required to enter information on a tiny keyboard without making any mistakes, backspace was not really on the radar. 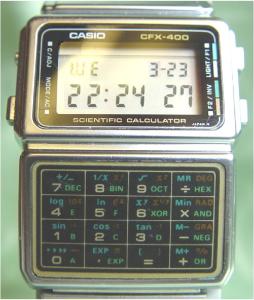 It is hard to describe how it felt to have one of these. At the time it was quite a cool item, much different than today’s perception. In the beginning it was a status symbol and not the nerd badge it quickly became. Celebrities, socialites, and businessmen all jumped on the bandwagon almost overnight. Oh how the mighty fall when this little number, once worn by Sting, gets the Dwight Schrute treatment.

Because of their relatively low cost and my propensity to break them, I actually went through a number of Casio Databank watches, dutifully entering in lots of information in each one over and over again. The metal original was always my favorite and I found the membrane keyboard more durable than the later button based models. In fact the buttons were why I eventually gave up, it seemed impossible to keep them working for any extended use. Simply too small of a button to absorb repeated data entry use.

Casio really dominated the space for the next 15 years. The watches slowly became more powerful, with more memory, more games and even a few integration’s with PCs. During this time I moved away from watches altogether and did not even consider them again until the rise of Palm.

In 1996 when I got my first “data bucket” from US Robotics my world truly shifted. The idea that I could carry all my information with me and easily access it really opened my eyes to possibilities. I find it very similar to the way Chromebooks have changed the way I use a computer. The idea that you would not have your data accessible to you is foreign to our current generation of young people, but it was a reality not too long ago. Within a few years there was talk of Palm based watches and Fossil finally made it happen. 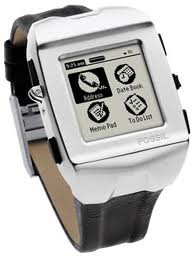 The watch itself suffered from poor battery life, heat build up and a low resolution screen. It was, however, a great way to get access to your contacts, schedule and todo lists. With a little hackery a number of popular games could also be played on the watch. I still remember being excited at getting Space Invaders to run on the watch. It was unplayable and the watch did not survive the effort but the achievement was quite satisfying. There was also a clever stylus built into the buckle of the watch. Many of the sensors we take for granted today were not present but it felt like a lot of power in a watch form factor.

The watch was never really a candidate for daily use. In 2003 it felt like it was behind the times even though it really had no peer. Technology had advanced quite a ways beyond Palm at that point and their lack of multimedia support was already signaling the end of their era. I do not think I could have placed my discomfort so accurately at the time, but the Palm watch did not excite me and left me wanting something different. I did however get excited again about the Smartwatch segment not too long after.

My next Smartwatch hailed from another unexpected sector or the market, sports instruments. Suunto , well known for dive computers and heart rate monitors, started making real wrist computers for scientists, military, and civilian use. In 2004 they released the X9, a GPS wrist-top computer with some amazing capabilities. In addition to being a very usable watch it integrated the ability to plan, map and track treks using Google Earth. This was an amazing bit of engineering at the time. I was able to use the watch and its successor the X9i all over the US and Canada. I still have the treks mapped in Google Earth and I will never forget the experience. In addition to the GPS, the unit also sported a chronometer, barometer, altimeter, thermometer, and compass. 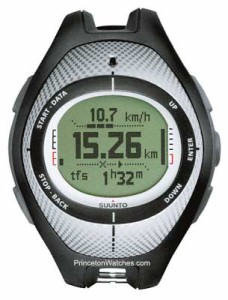 Being the first of its kind it was notoriously difficult to set up. I got pretty good at memorizing the button pushes to achieve a particular result. It was also pretty hard on its battery, you had to manually mark waypoints because the automatic mode would simply use too much battery. The watch was a marvel of engineering and Samsung could learn a few things from Suunto in this area. The watch also looked good, nothing overly nerdy or ugly about it. Sure it has a rich look with the carbon fiber body but it was quite at home wherever I wore it.

The X9i was a significant improvement although it really did not have many more features. On this unit it was possible to use automatic mapping and really stretch the software when in the back country. This watch was easily my favorite and most functional Smartwatch to date because it was useful when I was moving. This is an aspect of these devices that people do not think of. Everyone wants them to emulate the smartphone when they can provide so much more. They really come into their own when we are moving and our hands are not free to grab our phones.

Here is a map generated by data captured on the X10 version of the watch during a trek to Philmont. My experience going with the scouts on this two week trek and then being able to take them through the trek live in Google Earth was amazing. 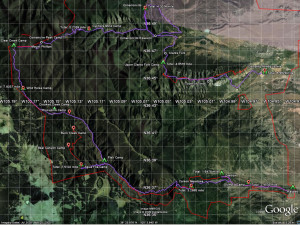 The power of having computing in a watch is not simply an extension of a smartphone. I really hope we mature beyond that very quickly. The possibilities of monitoring our vitals, activity, recording events, tracking, navigation, media consumption are all far different than other platforms. The value is the computing while in motion, I think we will see some very surprising innovations once the focus moves from the novel to the functional.

The current crop of devices is interesting. Below is an array of the current products either for sale right now or very soon. I have absolutely no idea which product I want to try. I am specifically monitoring the marketing speak, the comments, the app development for signs of maturity. It will take a bit of time for me to get what I want but I will enjoy the process! Who knows, maybe Apple and Google will come out with their often rumored and hinted at devices.

I truly believe that the Smartwatch is less of an invention by a company and more of a visualization by a generation. I believe the visualization is still in process and will be shaped in the next 5 years through normal market forces and the consumers of the segment. The creator of Dick Tracy, Chester Gould, has more claim to inventing the segment than any company that has built a product.