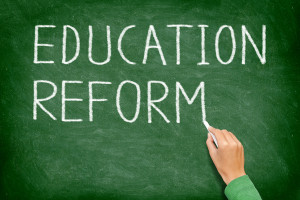 Over the past weeks the number of conservatives approaching me about Common Core has skyrocketed. As a school board member and someone actively involved in education I take notice of this. I am, and have been, aware of Common Core for some time, and all school districts are touched by it in a deep, substantive way.

There are a number of misconceptions regarding Common Core and I attempt to address them generally in this article. These misconceptions are not surprising, they stem from valid stimuli. Just like all things that are labeled organic are not part of the regulated organic accountability system, all things labeled common core are not the same either. Many companies, knowing that schools are revising curriculum have slapped common core into the title of their curriculum. Many of these unregulated and commercial pieces have become central in the public conscious causing confusion about the reality of the Common Core.

The Obama administration has also added to this confusion by wanting to “take credit” for the Common Core movement to rejuvenate and improve our schools. Their attempts to tie federal funding (this is a minimal part of school budgets actually dealing with education, as funding for lunches and buses do not count) have given the appearance that they are driving adoption. As far as I can tell, this is clearly not the case. The horse had left the barn on this movement long before “Race To The Top” was conceived.

There are two aspects of the communication with taxpayers that really have me thinking. I would like to address these in turn.

Americans are driven by media

I have not had anyone approach me on the topic that really understood what Common Core was. Everyone has sources of information in our technology rich and information based society. People select their sources based on ideology, politics, religion, and influencers. In the case of Common Core, there is a widespread assertion of evil often coming from conservative media input, with the use of selective facts. Conservative constituents are being blindsided by some traditionally reliable media sources. It seems that in the desperation of losing vital battles for freedoms and economic stability, these sources have begun looking for rallying points to activate emotions.

We see this in a number of areas, it is not hard to find. Next time you receive an email from a group that you trust, I would encourage you to read it through the following filter:

I think you will find that if you answer yes to the first two questions, then the rest will be true as well. This is our current pattern in American politics. It is much the same as the techniques used to incite vigilantism and lynch mobs in the past. We need to wake up and stop being driven by these things.

I have incorporated a few strategies that have helped me weed out this unnecessary input in my life.

1. Take in input from BOTH sides of the argument. Use your critical thinking skills and make the decision yourself. For me this means I force myself to open up CNN and FoxNews if I want to read headlines. You will find writers from the full spectrum of politics in my Currents reading list. I never want to demonize or dehumanize anyone I disagree with, I do not believe that is right or helpful.

2. I stopped watching broadcast news or video in any form. The medium itself does not lend itself to deep discussion of issues and the transfer of facts. Sensationalism is the order of the day on every channel.

3. I have accepted that I know enough to be dangerous. I cannot presume to know everything on issues as large as Common Core. It takes research, investment, and participation to understand. The issues at play are international in scope and affect millions of kids. I hold myself to this standard and I rate sources of input the same way. If they did not invest in researching the topic, then they are not worthy of following and should not be pontificating on it.

Everyone is different and these criteria may not work for you, they did for me. My life is much more pleasant and less emotional because of it; less reactive, more proactive.

In my many discussions I have noticed another important pattern. The alignment of forces against Common Core are identical to those who have been working to defund education for some time. Here is the problem, if you are detached from our education system and want to see it privatized, how can you place judgement on Common Core? Common Core is an attempt to improve the education of kids across the country and pull us to the front again internationally.

I find it incongruous to argue for local control out of one side of your mouth and then want to defund education out of the other. I am not saying that individuals are consciously doing this, people are not that nefarious. This is the stand that the coalitions fighting both of these issues have created. The same groups are pushing for the both the privatization of education and abolishment of Common Core in public education.

I addressed some of this in a recent article but I am still surprised at how reactionary and negative conservative representatives have become. They still cling to the intent to legislate morality and control behavior according to a certain standard. This means that even beneficial policies that can possibly be misused by others are not to be tolerated. I assure you, bad curricula are already in use across the country. Common Core does not create bad curricula.

20 years ago many conservative families left public education for home-schooling and private schools. This is partially the fault of educators, because they drove parents out of the classroom in that era. This separation, like any other, breeds distrust. I think the only solution is to re-engage in the common fight to educate the next generation. We need everyone to come to the table. If we can do it in communities across America maybe we can raise up leaders that will not behave as Congress is today. Right now the dysfunction in Congress simply mirrors what is occurring on this issue.

I am going to make simple statements here and encourage everyone to do their own research. I really hope Americans will go a little deeper and look at the problem being attacked and not every evil outcome that could come from an action.