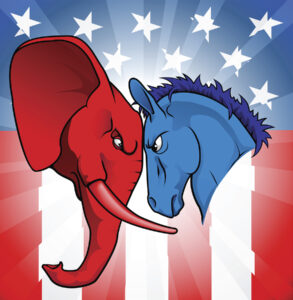 Call it naivete or idealism, I am disappointed that at all levels of government I see us moving towards extremes and not to common ground. Here in Missouri the new sessions of the state house and senate were widely reported as partisan and divided affairs. They could not even agree on rules of communication! The “Jumbos” and the “HeeHaws” were both hooting and trumpeting how the parties mistreated each other. I for one am offended by this behavior. I hope more people speak out, write about, and talk about the need for it to stop.

We see it at all levels of government and it doesn’t work. Extremist parties, like we have now, know two states of existence. First, they know how to be the blameless victim as the minority. “If only they would listen to us and include us we would work together to make this country better.” How many times have we heard that sob story. That same party when it comes into power becomes the Pious Bully and out of conviction cannot allow any compromise. Both parties are guilty of this hypocrisy and it is destroying our nation.

Will somebody in leadership please step up and lead?

I share the following with an obvious caveat, local politics are far simpler than those faced by other governing bodies. I know this but it does not change the truth of what I see here on the Affton Board of Education. In this group of seven individuals you have people who live across the political spectrum. We have conservatives to make the Tea Party jealous and liberals who ride on the wild side. I will be in trouble after that last sentence, but my point is this: The members of this board show each other respect. There is no hooting, no talking down, no name calling, no posturing, there is intentional respect.

Because of this respect we are able to work through our differences. We do not live on emotion, but we act on facts. I cannot emphasize that last point too strongly so I will repeat it a slightly different way. We get beyond our emotional reactions to issues, people and circumstances. We clear our “sight” and look at real information and listen to everyone’s opinion. We then vote our conscience without consequence. It works, and I have six other board members and a rising school district that will back me up.

As Americans we need to stand up and ask for better. We can do this by demanding this behavior from our local politicians. At a local level a few votes make all the difference. Demand honest debate, respect for all who express an opinion or perspective. Demand that all people be treated like the valuable individuals that they are. I know this is an idealistic perspective but it can work if we will try.