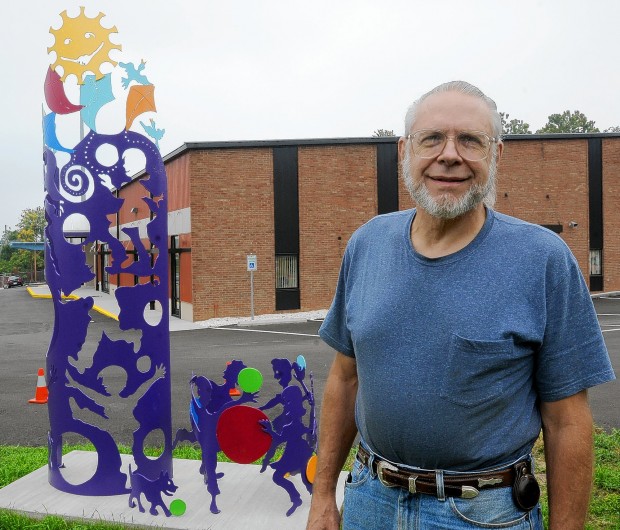 When the new Affton Early Childhood Center opened its doors in August, a tour revealed an interior with up-to-date technology, wide open spaces and bright colors.

That wasn’t enough for the administrators. They wanted something that would make the building stand out as a landmark.

They turned to Fenton sculptor Don Horstman for the answer.

He produced a sculpture, called “Childhood,” made of quarter-inch steel sheet. The work consists of an 11-foot column with cutouts of running and dancing children, circles, curliques and birds, surmounted by a smiling sun. Alongside the column are the metal silhouettes of those same children holding hands and dancing in a circle while a dog romps at their feet.

The sculpture stands at the intersection of Reavis Road and Reavis Park Drive.

This is not Affton’s first foray into art or landmarks. About 25 years ago, the district installed an 18-foot-tall ice cream cone in front of Mesnier Primary School, 6930 Weber Road. The cone once stood in front of a Velvet Freeze ice cream store that closed.

Since that time, Mesnier has been known as the Ice Cream Cone School.

“The Early Childhood Center was going to open, so we wanted something of our own,” ECC Director Karin Fleming said. “The kids love it. They touch it and look at it.”

Horstman also created a mobile in 1973 for Affton High School. He has a longtime connection to Affton High, serving as an art teacher in the Affton schools for 30 years. Horstman retired in 1996.

“We took a look at a portfolio of his work and were very impressed,” Fleming said. “His yard is like a museum. It’s filled with all kinds of sculptures.”

The district likes using Affton residents or people who are associated with Affton to create artwork, said Michael McNeil, president of the Affton Board of Education.

“The students can feel connected to it,” McNeil said. “Affton is like a small town. They know it wasn’t created by some stranger.”

A statue of a cougar, the high school mascot, was made by a local sculptor. The district’s administrative building has a large mosaic, also created by an Affton artist.

Horstman created a 21-inch model of what he had in mind. The district approved it and gave him an $8,000 budget. The funds came from ECC’s budget and some donors. It took about a month to finish the work.

The sculptor wants to make sure his wife, Carol, gets credit for the dog in the sculpture.

“She told me that you’ve got kids and kids need a dog,” Horstman said with a laugh. “So, she was the one who thought of the dog.”

Published on October 1, 2012 in the Suburban Journals.