“With an audience of more than two dozen watching, representatives of planning consultants PGAV, developer G. J. Grewe and Shrewsbury city officials gathered Wednesday to answer questions from the TIF commission about the proposed $48.9 million Kenrick redevelopment and the cost-benefit analysis. Despite having received the questions in writing after the last meeting, however, special counsel to the city Mark Grimm told the commission that some would have to wait until changes being made to the site plan were assessed.

“I’m frustrated to not have all the data. I want to do my job,” said commission member and Affton School Board President Michael McNeil after the meeting.

PGAV, Grewe and Mayor Felicity Buckley answered most of the commission’s written questions, but inquiries about the rate of return on investment at the development and the feasibility of the project if sales at the proposed Walmart Supercenter were less than projected—those would have to wait until the cost-benefit analysis presented to the commission on Oct. 5 had been revised. 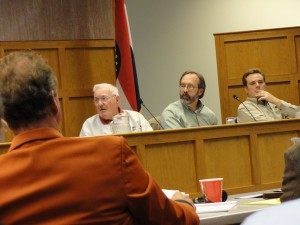 Developer Grewe told the commission that the site plan was being changed to not touch the guy wires of the nearby radio tower, so as to avoid “years of litigation.”

Buckley said she was pleased with the changes. “I think it will be an improvement,” she told the commission.

Though the changes were said to be slight, the cost-benefit analysis will need to be revised. Grimm proposed that the commission have another meeting after the revisions were completed next week. However, in the end, no such meeting was scheduled. Instead, the commission will get its questions addressed before the public hearing scheduled for Nov. 30.

“I don’t understand why it took until now for the site plan to change,” said Shrewsbury Ward 2 Alderwoman Dee Wiecher, who was in the audience. “It’s unfortunate for the TIF commission.”

After the hearing, the commission will have 30 days to pass a resolution either supporting or opposing the proposed $20 million tax increment financing agreement. Commission chair and former Shrewsbury mayor Dan Lowery asked the other members to consider voting on such a resolution immediately following the public hearing.

At their last meeting commission members from St. Louis County questioned the cost-benefit analysis’s projections showing revenues of $600 per square foot at the proposed Walmart—significantly higher than county data predicting $425 per square foot. On Wednesday the commission again raised the figure, which director of planning Glenn Powers had called “pretty breathtaking.”

PGAV Vice President John Brancaglione told the commission that the number, based on total first year revenue projections of $77 million, was derived from combining the average sales at a small-sized regular Walmart with that of a typical grocery. PGAV could not show sales figures from similarly sized supercenters in the area because they do not exist, he said.

“This is not something we take lightly,” Brancaglione said after commissioners from the county and the Affton School District pressed him on the issue.

Not everyone was convinced by that math, however.

“They put the project in isolation, as though it doesn’t exist in a larger economy,” Julia Hoffman toldPatch after the meeting, adding that Walmart sales across the country have been dropping for nine straight quarters.

Hoffman, a tax consultant with Ernst & Young, had been on the citizen’s advisory committee earlier in the Kenrick redevelopment planning process and had opposed the Walmart project. Now she sees PGAV’s cost-benefit analysis as not showing any scenarios of risk for the redevelopment.

“It’s nothing, or it works perfectly,” Hoffman said of the analysis.

A public hearing on the TIF agreement is scheduled for Nov. 30. Individuals and organizations who wish to address the commission will be given 5 minutes each to speak.”

Printed in the Affton-Shrewsbury Patch on November 11, 2011