My smartphone journey through the years has been quite time consuming and interesting. Occasionally it can be entertaining and embarrassing. Nothing like exploring a new device after working days to carefully upload data to find you have to start over. Fortunately we have come a long way in terms of data portability. Looking back can remind us of the progress (or lack of) we have made. My children are now permanently attached to their electronics devices. While I have been immersed in technology my whole life, it was not nearly as integrated into my daily life. I can clearly remember the days before computers, cable television and wireless phones. Mine is the last generation to live with feet firmly planted in the before and after of the technology revolution. I begin to have a perspective on how my great grandmother felt about the industrial revolution. I still remember her describing the world before the automobile in much the way I think of the world before computers.

When I graduated from college in December of 1992 cell phones were just becoming a part of real business life. While the first mobile telephone call was made in St. Louis in 1946 it took generations for the technology to come to the handheld level. I remember the bag phones that were initially in use but my history starts with the first flip phone.

This little number was my pride and joy in 1993. It cooked your hand and your head if you talked more than thirty minutes but it was amazingly advanced for its day. The phone was amazingly light for the day and weighed just a few ounces. It was roughly 5″ tall and 2″ wide. With the larger battery it was roughly 1.5″ thick.

With extra batteries and a car dock installed I was ready to begin my wireless addiction. I could roam the city and even many interstates and make all the phone calls I wanted. The first hands free adaptations were awful and I probably should formally apologize to all the people who strained to hear my voice for hours on end as I excitedly felt the need to call. I had the technology after all!

When I managed to figure out how to connect my laptop to my commander I was even more empowered! I could send faxes, I could dial up my favorite bbs (who even knows what that is anymore), I could….waste hours trying to get it to work. When it worked it was very exciting. When it didn’t I probably lost five years off my life worried I would not get a proposal or contract to someone. Within weeks I became so connected to my cell phone I could not live without it. I was already tied to functions we now associate with smartphones.

While the pocket commander would never qualify as a smart phone, I felt it was relevant because of the connection it made in me to those other functions beside the phone call. 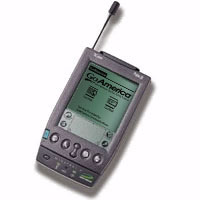 Once I got a taste of mobile connectivity I would not be denied. I purchase one of the original Pilot 5000 in 1996 and began a 8 year love/hate relationship with the palm os. In early 1998 I upgraded my then current PalmPilot Professional to a Palm iii. I had experimented with some wireless modem offerings for my first Pilots but those efforts were not that reliable or successful. My first real success was my purchase of the Minstrel wireless cradle with bundled nationwide data access.

The minstrel was tied to the GoAmerica wireless data service and operated at a rockin 19.2Kbps. The service gave you access to news, sports, travel information and even pop3 email. This was the first device with which I actually “browsed” the web. I do use that term loosely.

The combination of the palm os data bucket design and access to online data really was unique at the time. Very few devices allowed you access to so much information without a full laptop and a wired connection. Remembering just how transforming the device was combined with the utter train wreck that was the company behind it should give Apple and Google pause. They are not as invincible as they might appear. Palm was once the giant that they are now with ios and android.

I have to admit the palm iii was one of my favorite devices. I became very accurate with the Grafiti handwriting recognition and started taking detailed notes in meetings. I have them archived somewhere, I may pull them out and throw them in Evernote just for the fun of it. 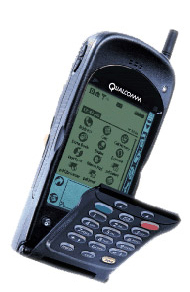 The excitement at the launch of this device was palpable…at least in my world. My very first smartphone. I had experimented with trying to get voice through my palm iii ultimately leading to its demise. My palm iiic had to bridge the gap to my PDQ. The PDQ used Palm OS 3.0 and it was actually integrated pretty well. After some updates I recall being able to make calls from my contacts, browse the web (again loosely referenced), and email.

The “brick” as we called it, looked ridiculous on my belt but gave me an air of superiority. I was unmatched in geekdom with this hot little number! I laugh at myself as I look back. I spent hours and hours showing it to people, demoing its features. I have no idea how many seeds I planted that bloomed into addicted smartphone users. I was a loud proponent for integrated communication. I would talk to anyone that would listen.

In private I was often quite frustrated with the device. I could almost do everything I wanted to. I could almost get through a day on the battery. I could almost stand to carry it everywhere. Lets call this the “almost” smartphone. I have never looked forward to a new device like I did the 6035. I was addicted but barely functional with the PDQ. Every release delay for the 6035 was more and more painful. I don’t perfectly recall how I destroyed my PDQ, I just know I did…