This is part two of a three part article, you can read part one Here 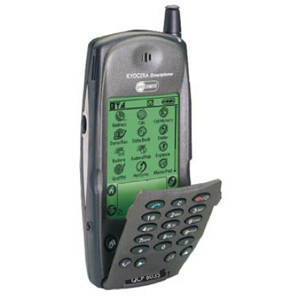 After waiting at least an extra six months the second generation palm phone arrived. I had completely maxed the memory and potential of the PDQ and I was really looking for something much better. The 6035 delivered on many fronts. The phone integration was much more reliable and consistent. Some of the bugs had been worked out and the unit looked much much better. It was also of a size that was more palatable. Having lived with the brick for a couple of years I was longing for something more portable and less obvious.

It was at this point in the Palm OS development that innovation appeared to stop. The interface was not updated and while other operating systems were starting to catch up and expand features, Palm stayed stagnant. We did not know it at the time but the products were on a downward spiral and the company was a mess.

Despite these market issues the 6035 was a well conceived device and we see design cues still today in modern smartphones. I find it interesting that Palm devices got a number of things right that we now attribute to other designers. The size of the screen of a current iPhone is the same as an archaic Palm iii, the icon driven interface, easy consistent app design, the concept of a “data bucket”, all innovations from this era. Even the concept of an application marketplace was forged by this same group of innovators. What a shame their contributions are largely forgotten in the corporate malaise that followed. 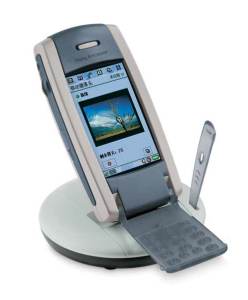 Seeing no future in the Palm ecosystem I started hunting for my next smartphone. After a lot of research I imported a brand new device running the UIQ Symbian OS. The P800 was limited on compatibility with US carriers but it was long on modern features. The design of the device was a breath of fresh air after the gray plastic of the Palm devices. The OS worked exceptionally well and even the design of the stylus and accessories were simply beautiful. The phone was well balanced and worked exceptionally well.

Another standout feature was the media integration. This was my first phone with an integrated camera. Still pictures were pretty good by the standards of the day and the phone would even play music and videos. The expandable memory stick slot (up to 128mb) allowed quite a bit of media to be available for the phone. This was another conversation starter because it was fairly rare here in the US.

The Achilles heel of the device was the cumbersome updating process. One had to be very careful in the process or your data was gone. Literally one hiccup in the process and poof, everything is gone. The limited compatibility to US cell bands was also a severe  limitation. All things considered it was a very capable device and quite advanced for the time.

It is amazing that by this point the inclusion of email, call integration and other pda features were not considered advanced. They were a necessity. Oh how we so quickly forget where we come from. 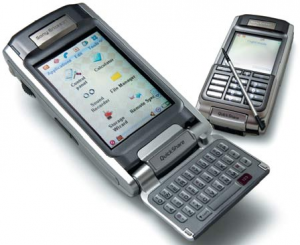 Prior to its US release I also imported the next generation Symbian phone. Not offered on US carriers but for a short time this phone was long on software improvements and unfortunately a loss of design ethos. What an ugly phone this was. It did not feel right in the hand and it was awkward to use. The flip out keyboard was also very poorly designed and almost impossible to use.

The performance of the device improved but you could tell that like Palm, Symbian had lost its edge. The innovation was no longer there and they were just hitting incremental improvements. When one is striving for excellence and market leadership, complacency is a cancer that is deadly. It was very obvious I would need to look in a new direction for my next smartphone.

Bizarre as it may seem today, during this period from 2004-2007 Microsoft started to take hold of the smartphone market and leverage their desktop dominance. Symbian devices never really caught hold in the US and I believe it is because they focused on the higher volume, lower margin portion of the market instead of high profile smartphones.