This is part three of a three part article, you can read part one Hereand part two Here When one uses Windows on all his computers, relies on Outlook for email, and Office for all documents, its only natural to have Windows Mobile on your phone right? Well that is where I was back in 2006 when I decided to finally give up on Symbian and make a move. Believe me, I was very reticent to try it. We were at the pinnacle of the BSOD (blue screen of death) era at the time and your phone cannot be a point of weakness.

My experience for the first year with the device was quite good. After the first year it was quite a different story. I was amazed to find that Windows Mobile 5 and 6 suffered from a common Windows ailment. The phone simply got corrupted at some point and became more and more unreliable. Resetting and reloading only solved part of the problem and my experience never really was the same.

The phone itself did a number of things really well. The integration with Outlook was completely solid. The keyboard that was copied off of RIM was the best I have ever used. The portrait screen orientation was very effective for emails and limited browsing. The screen was also view-able in direct sunlight, a real plus when you are outdoors a lot. This was also the first device I regularly used to connect to wifi. Network data at the time was anything but speedy and browsing took forever if you relied on T-Mobile’s network.

This was also one of the first devices to have a soft touch rubbery finish. I have come to appreciate it as a screen saving feature that should be required of all smartphones. I am far less likely to drop a tacky rubber finished object that a slick piano finished device. They tend to wear a little over time but we use our phones right? If you look back at the smartphones I have owned, I am far more interested in function. Looks are not a requirement.

There were some problems with the Dash. Windows mobile was far from fully baked when you moved outside of the Outlook integration. Documents, especially spreadsheets were a joke. Playing media typically caused the device to lock, and a battery removal would be required to even reboot. Also the camera was simply horrible. I am not a huge Microsoft fan, I would love to bill them for all the hours of my life I have wasted rebooting machines and installing updates. I will save that rant for another time. It was 2008, the iPhone had been introduced the previous year and Google was about to enter the fray with its not so secret Android phone. The iPhone was a real consideration, a beautifully designed and marketed device. My hesitation with apple goes back twenty years. They typically have beautiful and outstanding designs but they sacrifice user accessibility for ecosystem control. They do not even allow access to the battery. For me this was a deal breaker so I suffered with a unreliable Dash until the G1 shipped.

I found it interesting, and convenient, that Google decided to launch on a smaller network. In hindsight it worked very well, they sold plenty to establish themselves and the opportunity to work out kinks with a smaller set of users had to help. The bug fixes and enhancements were numerous and frequent. It was obviously a recipe for success as sales of Android phones have been on a continuous rise becoming the most popular smartphone platform.

It was quite a relief to use a well designed OS that did not have the problems that hounded its predecessors. Faster processors, denser silicon and a high resolution screens allowed both Apple and Google to bring us the experience we have been looking for. Palm was actually capable of delivering this kind of experience if they had appeared on the scene later or managed to not self destruct. I have found the Android experience intuitive and reliable. The integration with Gmail is tight but what I have found most useful is the contact ties across mediums. Bringing up a contact and choosing where you will contact them is a real time saver. Phone, email, sms, mms, facebook, twitter and others are all tied to each contact. The power comes in the integration that goes multiple directions. You can touch the contacts services or choose the application and touch the contact. The tie goes further in allowing you to choose from many applications and services to share a status or a photo.

The hardware of the G1 was understandably conservative. Google took no risks and the device will not win any beauty contests. The ugly factor has been brought up many times with the G1 but function was obviously their priority. The strategy clearly worked and today you can buy a pretty and functional Android phone from any carrier at multiple price points. Whether Apple likes to admit it, they are now in the same position in the phone market that they have been for generations in the PC world. The iPhone is for those with a little disposable income or a need for a chic device.

I believe history will be kind to this ugly duckling of a phone. It was an amazing device and was a quick enough response to Apple’s iPhone to stem the tide. This was truly a development phone that happened to be good enough to use on a daily basis. You can credit good design and a fair amount of luck to Android success. At any rate, its always better to have strong competition to continue to drive innovation. 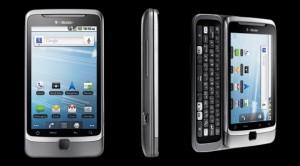 The G2 like its name is simply an iterative device. It is almost as if it is the real production version of the G1. While the OS has changed continuously for the better, the hardware had plenty of room for improvement.Almost every aspect of the G2 is improved. Screen, controls, size, battery, microphone, camera as expected are all on a new level.

The only major step backward was the keyboard. I really wonder what anyone was thinking. The G1 had a dedicated row of number keys across the top of its keyboard. This was extremely handy when typing in numbers for contacts, mathmatical computations, or other numerous uses. For some bizarre reason the G2 dumped them and an additional keystroke is needed to access the number keys. In the future I think we are simply moving to a touchscreen phone world so we will likely see keyboards dissappear. The keyboard on the G2 is significantly inferior to the G1 and that is a shame.

With the release of the latest Android, Ice Cream Sandwich, it will be interesting to see where we go. Android forking the tablet OS from the smartphone OS and then re-converging is an unprecedented approach to OS development. Honeycomb has been panned by the same people that criticized the original Android. As a daily user it is a competent and functional interface that I find very close to a full desktop replacement. The tablet OS release was a slower response to Apple than the G1 was. One difference is the iPad forged a market that had existed only for the nerds and uber rich previously. The iPhone was jumping into a mature market space and shifts are faster the smaller the device.  This next year will truly be interesting.