“After years of frustration with the federal No Child Left Behind law, local educators are optimistic that recently proposed changes could lead to a more accurate assessment of student achievement and district quality.

President Barack Obama announced the changes during a Sept. 23 speech at the White House. The changes would allow states to apply for a waiver to set their own standards as long as they meet basic guidelines established by the administration.

The president’s plan does away with the requirement that every student pass state tests in math and reading by the 2013-2014 school year, and gives states the flexibility to design their own school accountability and improvement systems. But that doesn’t mean they’re off the hook.

“Keep in mind the change we’re making is not lowering standards,” Obama said. “We’re saying we’re going to give you more flexibility to meet high standards.”

That’s a welcome change for high-performing districts – such as Webster Groves, Kirkwood, Affton and Lindbergh – that continually show improvement yet still fail to meet Adequate Yearly Progress (AYP) benchmarks set by No Child Left Behind.

AYP decisions are based on the results of state testing in math and communication arts, as well as the district’s attendance and graduation rates. Districts must annually test students in both subjects in grades 3-8 and once during high school.

Schools must meet the proficiency levels – which climb every year – overall and in subgroups including racial/ethic categories, special education, low income and limited English proficiency. If a district has not made AYP for two consecutive years in any one of the four areas, it is considered in need of improvement.

Under current Missouri AYP benchmarks, which were set at 75.5 percent proficient or above for communication arts and 72.5 percent proficient or above for math for the 2010-2011 school year, only a fourth of the state’s 2,187 schools met those standards. But it doesn’t mean those schools and districts aren’t performing well – it’s just that AYP standards simply aren’t attainable, many educators say.

“The goals of AYP are not realistic and they never have been,” said Nancy Rathjen, assistant superintendent of curriculum and instruction for Lindbergh Schools. “We’ve seen tremendous growth in all of our subgroups in communication arts and math for 10 years, so we know we’re helping more students be successful, but then we’re being labeled as needing improvement. It’s a labeling process that is not accurate.” 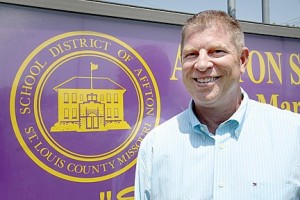 “Although they have caused us to get better at analyzing data and hold us more accountable, the (AYP) benchmarks are not realistic,” he said.

And the punishments for not reaching them are unfair, Brotherton added.

Punitive measures include giving districts less federal funding, requiring them to contract out tutoring services, giving students the option to transfer to a different school and others.

“Some of those restrictions that you fall into if you don’t make AYP are very punitive – and they’re punitive in the wrong way,” Rathjen said.

Both the Affton and Lindbergh school districts earned “Distinction in Performance” status for high MAP test scores, but were among the 75 percent of Missouri schools that failed to meet AYP.

Rathjen expressed the difficulty of attaining 100 percent proficiency in subgroups such as special education and limited English.

While most educators and administrators agree that No Child Left Behind helped schools identify student needs and close the achievement gap, they’re glad to see changes on the horizon.

“On one hand it has focused us deeply on how to accelerate students and help them achieve, but it’s a very difficult set of guidelines,” Rathjen said. “I support the waivers or really anything that looks at a more wholistic approach to whether you’ve made AYP.”

Julie Collins, assessment coordinator for the Parkway School District, also said she supports making the standards more attainable. She would also like to see the benchmarks focus more on individual growth, slow and systemic changes, and college and career readiness.

“It does seem to be a positive step in the right direction,” she said, referring to the proposed changes to No Child Left Behind.

In the meantime, Parkway will continue to focus on its own strategic plan and measurable objectives for student success.

“We’re really going to keep our eye on what it is in Parkway that our needs are and that’s really where we put our efforts,” Collins said. “We’re certainly not ignoring it (No Child Left Behind) or not worrying about it, but we think if we focus on our own plan the rest will fall into place.”

Brotherton has a similar philosophy.

“You tell us the standard that you want us to meet and we’ll try to meet it, but for me, the most important thing is that teachers are working to meet individual student needs,” he said. “We’re scoring high, and our teachers and administrators are always talking about how we’re going to get better.”

The U.S. Department of Education said the waiver is available to any state wanting to design and submit its own accountability programs based on mutually ambitious targets. Missouri Commissioner of Education Chris Nicastro said state officials will examine the waiver criteria and seek input from educators and non-educators before submitting a recommendation to the State Board of Education on whether to proceed.

“We are pleased to be able to consider such a waiver, but it is too early to say whether the state of Missouri will apply,” Nicastro said in a written statement. “We remain absolutely committed to accountability, but we believe the outdated No Child Left Behind accountability system is broken. The need to fix it is urgent.””

Printed in the Affton-Shrewsbury Patch on October 7, 2011