According to the presentation by Associate Director Andy Struckhoff, PGAV projects that the proposed development would bring in $87.8 million in revenue within the first 12 months of operation, starting in March 2013. $77.8 million of this would come from the anchor store, a Walmart Supercenter.

The development would also bring in just over $1 million in sales and property taxes to Shrewsbury’s city coffers in its first year, Struckhoff said—$936,000 more than the $131,000 the city currently gets from the run-down shopping plaza. City officials have argued that without significant increases in revenue the city may struggle to maintain services.

Other taxing districts, such as St. Louis County and the Affton School District, would also collect increased revenue from higher property values at the TIF-funded development, but the vast majority of new revenue goes to Shrewsbury. According to Struckhoff, the Affton School District would receive only 3 percent of the new TIF revenue—a figure Affton business director John Brazeal suggested might be inflated.

The presentation also covered PGAV’s assessment of the growing blight at Kenrick Plaza, particularly the closed Kenrick Cine movie theater. Struckhoff said the theater is now a health and fire hazard filled with potent mold, and has been broken into, stripped and vandalized. The closed Burger King is also decaying, and has been broken into as well.

Struckhoff said that the costs of demolishing and clearing these buildings, as well as other difficulties with the site, make Tax Increment Financing (TIF) a necessary part of the redevelopment project. Developer G. J. Grewe has asked for $20 million in TIF money to build the development, which is now estimated to cost $48.9 million. 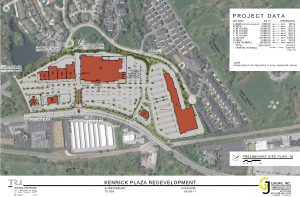 “($600) is pretty breathtaking in our experience,” director of planning Glenn Powers said.

Struckhoff said that the $600 projection was higher because the proposed Walmart would be smaller than most other Supercenters, but would still do a similar amount of business.

County officials also suggested that while the development might bring new money into Shrewsbury, it would do so by “cannibalizing” business from surrounding areas, resulting in little total new tax revenue for St. Louis County.

“This is not a net increase in sales in the St. Louis region,” said Anne Klein, county director of sustainable energy.

PGAV Vice President John Brancaglione suggested that much of the shift in sales would come from St. Louis City businesses, and that cuts into sales at county competitors would eventually fade.

County officials proposed a further work session of the TIF commission to go over the cost/benefit analysis in more detail and answer further questions members had about the redevelopment project. A new meeting was scheduled for Nov. 9, the date originally chosen for the commission’s public hearing, which was pushed back at the meeting to Nov. 30.”

Printed in the Affton-Shrewsbury Patch on October 7, 2011