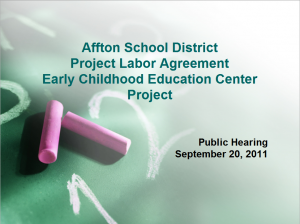 “Tuesday’s Affton School District Board Meeting turned into a showdown between construction contractors, trade associations and union groups during a public hearing on the district’s proposed use of a union-only project labor agreement.

More than 50 people packed into the board’s Tuesday night meeting at Rogers Middle Schoolto voice support and opposition to the project labor agreement (PLA). Such contracts are typically used by governmental organizations to ensure that construction jobs are completed properly and without delays by requiring that all contractor employees comply with the terms of the union-only agreement.

The district is considering requiring a PLA for bids on the estimated $2.6 million renovation of an industrial building at 9832 Reavis Rd. The 20,000-square-foot structure will be transformed into the Affton Early Childhood Education Center and feature seven classrooms, a project room, a nurse’s office, a lending library, a stage and a small outside garden.

In a report to the board, Affton School District Business Director John Brazeal outlined the statutory basis and rationale behind the PLA. Brazeal said the district has never before used such an agreement.

“There are a few issues that have arisen in the past with construction projects,” Brazeal said, pointing to problems with prevailing wage fines, OSHA violations, sub-standard workmanship and delays. “These are things we hope to overcome with this kind of contract.”

James Knowles, from the national trade organization Associated Builders and Contractors, took exception to Brazeal’s reasoning during the public comment portion of the meeting. The group represents non-union workers, what he called “merit workers.”

Knowles said the association provides training in 35 different areas to non-union tradesmen and requires the same level of certification that the federal Department of Labor asks of union employees. He also pointed to examples in St. Louis of union jobs that have had delays, safety violations or wage issues.

“What I am saying is that if you do only union are you guaranteed to have no problems? Absolutely not,” Knowles said. “It’s about making sure you get the right contractor. It has nothing to do with whether he pays dues to a labor organization.”

“No one discriminates against (non-union employees) on tax day and we ask that you don’t discriminate against on bid day using those taxes,” Tielke said.

However, many individuals wearing T-shirts emblazoned with union logos also turned out at the meeting. James Faul, an attorney representing the local unions, argued that a construction bond is not enough to guarantee a quality job.

“PLAs in this community have shown and proven that they work in bringing projects in on time and under budget,” Faul said.

Supporters of the PLA also included two former Affton board members and Hancock School Board President Kevin Johnson. Johnson said his district has done six major projects since 2007, including a $15 million high school, all under PLAs.

“Every one went smoothly,” he said. “As a school board member, it was a hard decision, as you all know…I don’t know how it will work for you, but I can promise you it has helped our school district.”

The public hearing ended without the school board setting on an official date for a vote on the agreement, but state statute requires that a decision be made within 30 days of Tuesday’s meeting.”

Printed in the Affton-Shrewsbury Patch on September 21, 2011