“Talk about before and after. By this time next year, the Affton School District plans to turn the hard-edged industrial building at 9832 Reavis Rd. into a place of growth and learning area for 3 and 4-year-olds.

The details of this planned transformation were revealed Wednesday at Rogers Middle School as Kroom, Rikimaru and Johansen Architects (KRJ) revealed their design for the Affton Early Childhood Center to the ECE committee and school board.

The design for the 19,000-square-foot space includes seven regular classrooms, diagnostic rooms, a nurse’s office, a project room, a lending library, a stage and a small outside garden. 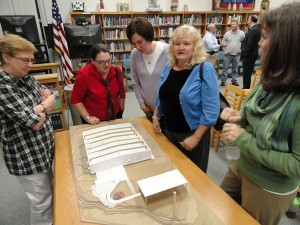 “I’m really impressed with the plans,” said former Affton School Board President Ron Becher, who has been heavily involved in developing the early childhood center. “It’s one of the most exciting things I’ve been a part of.”

KRJ paid special attention to making corridors and other non-classroom spaces useful for learning and exploring. Some walls in the design are textured and molded in patterns that continue into frosting on the low windows. The reception area has nooks where iPads can be set for children to play with or to show off student projects.

Many of these elements were suggested by the ECE committee, and when presented with the more finished design, the committee quickly began brainstorming further features to add.

“This is a great group to work with,” said KRJ’s David Kromm.

Almost all KRJ’s work is for schools and community colleges. Last summer, the 12-man firm worked on an ECE building for the Brentwood School District. They were one of four architects the Affton School Board interviewed about the project.

According to a presentation made by Assistant Superintendent Ken Weissflug, Affton’s ECE program began in 1971 with a small half-day program that expanded to full day in 1974. In 1984, Affton partnered with the Lindbergh School District for a joint ECE program that lasted until Lindbergh moved on plans to develop its own program in 2006. Affton then partnered with Special School District to created a joint ECE program at the St. George building. The St. George School has one Affton classroom and four SSD classrooms, which will continue to operate at St. George after the new center opens.

The new center is slated it to open in fall of 2012. The district will award bids for construction in November, and construction is expected to begin in December or January.

Affton Superintendent Steve Brotherton said the district hopes to begin enrollment for next year as soon as this coming November.

Printed in the Affton-Shrewsbury Patch on September 15, 2011