“Members of the Shrewsbury TIF Commissionclashed over scheduling issues at their second meeting Wednesday, which caused the meeting to be adjourned and delayed until a later date.

The 12-member commission is composed of representatives from Shrewsbury, St. Louis County government and the Affton School District. Its task is to issue a recommendation on developer G.J. Grewe’s request for $20 million in public financing to assist his redevelopment of Kenrick Plaza, which is centered on building a controversial Walmart Supercenter. Wednesday’s meeting would have included the presentation of a cost/benefit analysis of Grewe’s proposal from independent urban planning firm PGAV.

As soon as the meeting opened, however, Affton School Board President Michael McNeil informed the committee that he and his fellow school representative, Affton Business Director John Brazeal, would have to leave immediately. Two other members of the commission were also absent. 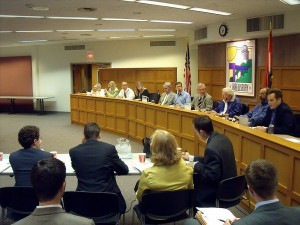 McNeil said the district was unveiling its early childhood center that same evening, so he had previously asked to have the meeting time moved. He explained that the center was its first new building in almost 50 years and a “cornerstone event” for the district.

“When we made a request to move this meeting after our first meeting, it was rebuffed,” McNeil said. “It’s a very difficult situation for us.”

The TIF Commission’s President Dan Lowry, a former mayor of Shrewsbury, said he was the “rebuffer.” Lowry said he received McNeil’s request via email and decided he did not want to reschedule the meeting over the Internet due to the controversial nature of the Walmart proposal.

“I just didn’t want to get involved in that, because I think there are a lot of sensitive issues here and a lot of people on both sides of the issue,” he said. “We had our meetings, we made our decision, and if we are going to do anything different, we have to do it in session.”

McNeil then made a motion for the meeting to be adjourned, which was seconded and passed. Lowry opposed the measure and later voiced his frustration with the decision.

“I am very disappointed that we are slipping this meeting,” he said.

The commission did not set a specific date for the rescheduled meeting. Instead, commissioners asked Shrewsbury Director of Administration Jonathon Greever to email several possible dates to the commissioners, government officials and business persons involved. Once a consensus is reached, the time and date will be publicly posted.

However, the commission did briefly reconvene to set a date for its public hearing. The hearing will be at 6:30 p.m. Nov. 9 at Shrewsbury City Hall and serve as a chance for any individual or organization to give the TIF commission their comments on the proposed public financing.”

Printed in the Affton-Shrewsbury Patch on September 15, 2011