Artwork will be painted “Affton purple” 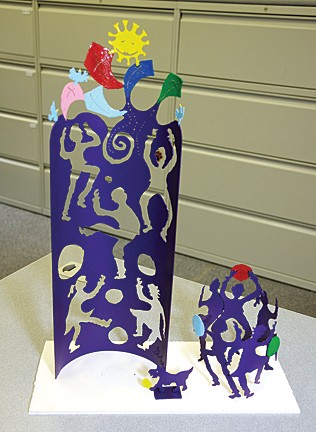 A miniature model of the 11-foot-tall sculpture to appear outside of Affton's new Early Childhood Center on Reavis Road. The sculpture is by Don and Carol Sue Horstman. photo by Diana Linsley

“The Affton School District’s Early Childhood Education Center — which Board Vice President Doug Beck calls “the best thing this board has done for the district in years” — is taking shape, as the countdown to fall’s grand opening continues.

Enrollment projections are firming up. The renovation of the structure on Reavis Road is more than halfway complete. And now a sculpture that is sure to catch the eye is about to pop off the design easel into three-dimensional reality.

The Affton School Board at its April 17 meeting approved the concept of an 11-foot high, dual-surfaced, quarter-inch rolled-steel sculpture it and artist Don Horstman believes will capture the spirit of the early childhood center. Horstman brought a scaled-down version of the sculpture to the meeting.

“I was called, and it was explained to me what the idea was. I got together with the superintendent, board members and the ECE director and based the design on those discussions and my own thoughts,” said Horstman, a former Affton District art teacher.

“I couldn’t wait, I was excited from the first,” Horstman said.

The metal sculpture will be painted “Affton purple,” topped by a yellow sun and multi-colored kites that rise above a group of young children at play. The work will be anchored in concrete on the Reavis Road side of the school. The gap between the child figures will be used as a planter for flowers or shrubs.

“One of the nice features is that you will be able to see the school building through the cut-out figures,” Horstman said.

“It will draw attention to the school, and I think it does give kids something to be excited about,” Director Chris Castellanos commented.

Board President Mike McNeil said after the meeting that the sculpture was not a donation, as the district is “paying some part of the costs associated.” McNeil said he did not recall the cost of the project, but that it was “part of the overall ECE budget.”

Superintendent Steve Brotherton said having the Horstmans, both former district teachers, associated with the project “makes for a nice connection.”

The board of education re-elected its leadership at the April 17 meeting. Mike McNeil was named president, Doug Beck vice president and Thomas Bellavia treasurer. Patricia Zahn was re-installed after having won re-election in April’s only disputed race.

The only issue of contention was the selection of membership to the board’s four committees. Director Chris Castellanos said the practice of accepting the president’s appointments at the first reconvened meeting could be improved upon by choosing committees after district priorities had been discussed more. The board agreed to table committee appointments until after a June workshop was completed.

The board approved seven “scholarships” per semester for potential students of the early-childhood center. The matter apparently created some lively discussion at a recent executive session, but the board overlooked its differences and unanimously approved the free admission offers.

The seven free tuitions for two half-day sessions per week will not be offered for general application, but will be allocated in line with the recommendations of the Parents As Teachers and ECE staff. The goal is to get some additional children who have been identified as facing “delayed development” though not qualified for special education.

District Business Manager John Brazeal reported to the board that a project it initiated in 2007 to attain energy cost savings by pursuing grants and strategically deploying resources has to date saved the district an estimated $129,000.

“We’ve looked at some efficiencies, and managed to add air conditioning throughout the district’s facilities while saving money on the natural gas side. It’s been a successful effort,” Brazeal said.”