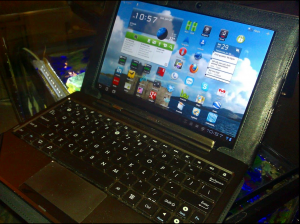 Over the years I have owned many tablets. My collection has included one of the original Toshiba 386 Windows 3.1 pen based tablets. Circa 2001 I owned an Electrovaya Scribbler tablet that yielded ten solid hours of use per charge. Both the Thinkpad and Fujitsu Tablet PC’s have been used and abused in my hands as well. The Scribbler and the Fujitsu were both used as my primary PC for extended periods. I have logged a large number of hours on a tablet and I have been surprised by what I have found in Google’s attempt with Honeycomb.

I have been using an ASUS Transformer

now for over six months and I have really pushed to see if it is possible to rely on it as a laptop replacement. My experience to date has been mixed, but I can honestly say I now use the tablet for a good percentage of my daily computing and I use it 100% while traveling and attending meetings. If you read reports from anyone that uses Apple products, the Honeycomb experience is terrible. After using it extensively I am chalking the negativity up to bias. I simply do not have another explanation. What I do know is that I can function far more effectively in meetings compared to my friends and coworkers on their iPads.

My focus in this article is the usability of the system but I would like to make a few comments on the hardware. Initially the OS seemed a little buggy and applications would sometimes close. The hardware always seemed to recover nicely unlike Windows computers(BSOD). The most annoying feature early on was the keyboard lag. As an experienced touch typist I was constantly thrown off when the screen was very far behind my fingers. ASUS has regularly released new firmware for the device and I can report the system today appears to be 100% stable and the keyboard lag is gone. The keyboard operates as if the tablet is a laptop, without any of the anomalies found when using bluetooth keyboards. The dock was a first class idea and really sets this unit apart, it also includes additional battery capacity and a number of ports. Battery life has been improved by the firmware updates as well. All things considered this is a very nice piece of hardware.

This writeup is mostly about usability and with reliable hardware that means the focus can be on the software. My daily software use can be broken up into the following categories:

As a Gmail user, I use the built in application. The Gmail client leaves very little room for complaint. It is actually clear that Google has upgraded the Windows browser client over time to work like the Honeycomb version not the other way around. One aspect that really works well for me is the ability to quickly switch between accounts. The process is very efficient and works well with the 10″ screen typical to the tablet environment. It is clear to me that the current design will not work well on smaller screens. This is evident in the differences in the phone scaled version.

I rely on Evernote for my note management. The application is one of the best on any platform. It is fast and efficient, requiring only a little adjustment from platform to platform. I actually have a strong preference to the Honeycomb version over the Windows version of the application. The appearance is more pleasing and the controls are a little more intuitive. Once Bluestacks is out of beta I plan to use it to run Evernote on my Windows machines, it’s simply better.

As a Facebook, Linkedin, Twitter and Google+ user I unfortunately have to rely on multiple applications to keep up with my friends and coworkers. Tweetdeck combines Facebook and Twitter, fortunately, but its interface is getting a little old and needs a refresh. The Linkedin application has improved dramatically in recent months and of course the G+ application is solid. All that is lacking is a really good third party app that includes G+ support, once Google publishes the API for G+ I expect that will happen quickly.

For productivity I use a combination of Google Docs Android application and Quickoffice Pro HD. I separated the word processing and spreadsheet discussions intentionally as the experience is very different. Both Gdocs and QO work pretty well with documents. Things stay fairly stable for most mainstream formats and you have to get to pretty unusual MS Word features before the applications cannot view an existing document effectively. The editing features have significantly improved and in general the usability is very good. I personally still think the cut and paste within Honeycomb needs some work, I understand it is better with Ice Cream Sandwich. Looking forward to the improvement. One major advantage with QO is the ability to access various cloud storage solutions from the single application. Allowing users to see their multiple Google, Dropbox, and Evernote accounts from within the application is very well executed. The three column approach appears to be the correct one for the tablet form factor.

The spreadsheet tools need some help. I have found only the simplest of spreadsheets editable from the tablet tools. Even viewing a spreadsheet is dodgy and I certainly would not recommend these applications as a primary tool for working with spreadsheets. Both Google and QO need to go back and fix the interfaces, they are simply terrible.

Video viewing is excellent. Playback is smooth and quality seems to be on par with desktops. I am looking forward to the development of more video editing applications. The nVIDIA chipsets are well suited for this purpose, and I expect good applications for editing to be available in the future. I will be sorely disappointed if they are not.

Publishing to my various WordPress sites is simply easier on the tablet platform. The app allows quick access to the sites without the need for bookmarks of urls. Once into a page edit the interface is the same as a browser on a PC. As is typical, WP is executed in a quality manner and works really well.

Ultimately browsing the web is very effective on a tablet. The strangeness comes from the inconsistency in browser implementations. I have found that I need the built in browser, Opera, and Firefox to access all my web needs. What is really strange is the browser I use for a given site can change on a regular basis. I have had Opera work one day on a site and need the Google browser the next. Flash seems to work well, which is a relief, but the inconsistency is irritating. What is painfully obvious is the lack of Chrome as an option. I am one person that really wishes Google would just roll Chrome into tablets and move on. They seem to be the only ones that think Chromebooks have a chance in the marketplace.

I have found my tablet to be acceptable as a laptop replacement for most tasks. While there will be applications that will be Windows only for some time, the list is shrinking already. We can now replace Microsoft on a number of platforms and I see that trend continuing. We appear to be living in a Google and Apple world for the foreseeable future. I will continue to report back as I garner more experience with tablets and upgrade to newer hardware and software.