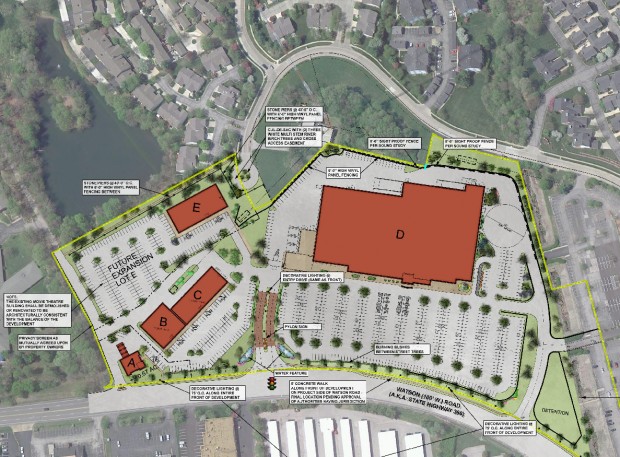 A preliminary site plan from September 2012 showing a proposed Walmart Supercenter in Shrewsbury.

SHREWSBURY    •   The city Tax Incremental Financing Commission Wednesday denied a recommendation that $15 million in subsidies be awarded to a developer with plans to build a Walmart Super Center on the site of an abandoned movie theatre along Watson Road.

The measure now heads to the Board of Alderman which is expected to override the commission and move the hotly-debated proposal forward.

“The residents have supported members of the board who have supported this project,” Mayor Felicity Buckley said at the conclusion of the two-hour hearing.

More than 200 Shrewsbury residents descended on a City Hall ballroom to debate the merits of replacing the blighted  theaters at Kenrick Plaza with a  130,000-square foot Walmart Super Center. 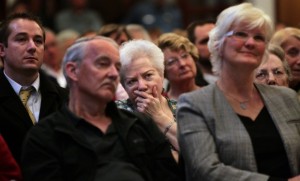 Shrewsbury residents packed a ballroom at city hall on Wednesday, Jan. 9, 2013 to listen to a hearing by the Tax Increment Financing Commission concerning the Walmart development at Kenrick Plaza. The commission sent no recommendation to the Shrewsbury Board of Aldermen. Photo by Robert Cohen, rcohen@post-dispatch.com

Critics decried the prospect of handing a $15 million tax break to the world’s largest retailers.

“School children and taxpayers should not subsidize a retailer that I find morally objectionable,” said Alderwoman Dee Wiecher, a staunch opponent of the project.

Supporters fear the loss of Walmart will further deplete services in their cash-strapped community.

“We need something on that property to bring value to the city,” said resident Joanne Morrissey. “I’m not a big fan of Walmart. But if (the corporation) is pursuing us then we should take it.”

Others joined Morrissey in expressing concern that the loss of Walmart could result in the closing of the city aquatic center.

Buckley dismissed the contention that revenue supporting the Affton School District stands to suffer  the most if the tax break goes through.

The mayor said the board will consider a proposal from the Affton Board of Education that the city share the revenue burden imposed by the TIF.

Voting 6-6, the TIF Commission divided on the question of the Affton proposal. In a second vote, the commission by 9-3 turned aside the original proposal to approve the tax incentive for Crestwood developer G.J. Grewe.

Following the meeting Affton School Board President Michael McNeil remained hopeful Board of Alderman will ultimately agree to shared tax responsibility over the 23 years the TIF is projected to be in place.

“We want to split it evenly,” said McNeil. “It’s only fair.”

The hoots of derision punctuating the public comments at Wednesday’s hearing proved the plan for a $46 million Walmart Super Center is no less a hot topic issue than it was upon the proposal’s introduction in mid-2010.

Criticism also focused on the advisability of building another Walmart on a site that is a ten minute drive from two other Super Centers the corporation operates in Maplewood and Kirkwood.

Still, when all is said and done, critics concede that Buckley has the votes to put a Walmart in Shrewsbury  – perhaps as early 2015.