The commission voted 9-3 against $15 million in tax breaks for a 172,000-square-foot redevelopment of Kenrick Plaza. A public hearing before the vote drew emotional testimony from residents for and against the project. 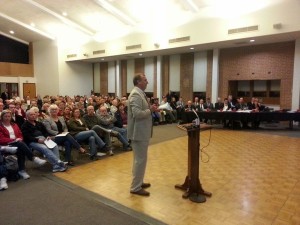 The St. Louis County TIF Commission has rejected the request for $15 million in public financing for a controversial re-development of Kenrick Plaza that would bring a Walmart to Shrewsbury.

The Wednesday night meeting at the Shrewsbury City Center drew an audience numbering in the hundreds and entailed more than an hour and a half of impassioned written and oral testimony during a public hearing from residents eager to weigh in on an issue many see as vital to the future of the city of around 6,000.

The commission voted 9-3 against a motion to recommend the proposed development agreement for the blighted property and the request for $15 million in tax increment financing.

In this case, the TIF would have generally split any increase in taxes collected as a result of the $46 million development 50-50 between the city and the project’s developer, G.J. Grewe for a set period of time.

The action by the commission is a non-binding recommendation that will be forwarded to the Shrewsbury Board of Aldermen, who will ultimately decide whether to approve the TIF and the development agreement that would go along with it. Such an agreement allows the city to stipulate the conditions of any proposed construction, from landscaping details to the physical appearance of buildings.

However, the rejection does have some impact. The Shrewsbury Board of Aldermen will now be required to pass any deal by a 2/3s majority instead of a simple majority, according to the city’s legal counsel, Mark Grimm.

The most current version of the plan along with a cost-benefit analysis are available on the city’s website.

The proposal by Grewe was initially brought to the city around 3 years ago, and since that time it has sharply divided Shrewsbury’s residents. This division was on display Wednesday night as some speakers were interrupted with boos and taunts during the public hearing portion of the meeting.

Critics of the proposal generally argued that the TIF amounts to a handout of tax payer money to one of the largest corporations in the world. John Bruce, a resident of the city since 1972, crystallized the feelings of many.

“I own two businesses and I have never gotten one dime from any goverment agency of any kind,” he said. “So why should a company like Walmart get anything from us.”

Many also voiced opposition to Walmart itself, including Shrewsbury Alderwomen Dee Weicher, who has criticized the development on numerous occasions and spoke as a private citizen on Wednesday.

She alleged that the retail giant offers low wages and poor health insurance for its workers, discriminates against female employees and actively seeks to put local companies out of business.

“I simply desire that the taxpayers and school children not be required to subsidize the business of a retailer I find morally and ethically objectionable,” she said. “A retailer who could afford to build this development with its own funds.”

On the other side, the development’s supporters frequently said that Shrewsbury is not in a position to turn down any economic development, especially re-development, that presents itself. In recent years, the city has been forced to cut its budget and dip into its fund reserves.

Many residents said they feared that by letting Kenrick Plaza stay largerly vacant, they risked losing the kinds of public services they have come to enjoy. Karen Wolf called the police, streets and park departments “unbelievable” and said it’s the reason she moved to the community.

“I could have gone further out, gotten more space and for cheaper, but I wanted to live in Shrewsbury for those reasons,” she said. “If this doesn’t happen, we will lose those services.”

There was also a sense among supporters that while a TIF may not be a perfect instrument, it has become so commonplace in St. Louis that large-scale redevelopment doesn’t happen without one.

“I’m not for it [the TIF], but communities do it in order to survive,” said resident Karen Diehl. “If there is an either-or proposition, either the TIF or the cutting of services in Shrewsbury, it’s not even close.”

For each side of the issue, the commission’s decision means that after years of debating and adjusting, the redevelopment plan is one step closer to a final vote.