At the beginning of 2013, I was thrilled to receive the new Google designed Pixel. It was, and still is, a pleasure to use. I have written about it many times the last two years with very little negative to say about it. Many harped on its few weaknesses, primarily battery life and getting a little warm on your lap playing video. Very minimal criticism when contrasted with other devices, all in all the Pixel is known to be an excellent device.

Using it as my primary device for a couple of years allowed me to see some other imperfections in its design. When making presentations using the mini-displayport I found on numerous occasions it was not quite strong enough. I was presenting at ng-conf, the national AngularJS conference, and my video output kept tearing. My device was the only one to have a problem.

The panel used for the screen is really bright but the glare from the glass is so disconcerting you have to be careful while using the Pixel outside. I also found the wireless radio was not quite as powerful as others. Performance was good but it was not as fast as I would have liked.

Now in 2015, here comes the new Pixel. It looks quite similar, it has a similar screen, what makes it different? As it turns out there is quite a bit to love and just a little bit to be annoyed about.

Lets start with the bad, and it is not really that bad. The speakers in the new Pixel are a downgrade from the original. Instead of being the best speakers I have ever heard in a laptop, they are simply very good laptop speakers. You can now tell they are laptop speakers.

I still use them just fine for Netflix, Hangouts, YouTube etc without a problem. People around me do not realize they are hearing lesser audio. I am the one that knows and it took me a little bit to accept that the new Pixel is just fine in the audio department. I have accepted that I was blessed to have my time with the original Pixel much like my M3 convertible years ago. It was likely the “best ever” experience.

Wow, wow, wow! The battery life on the new Pixel is life-altering. My work habits are radically different after using the new Pixel for the last month. I always buy a second charger for my primary devices. With the original Pixel I often carried a spare charger with me in my laptop sleeve (pictured).

With the new Pixel I have yet to be able to run the battery out of juice in a single day. I do not worry about screen brightness, or closing the lid when I walk away, I simply move from task to task. At the end of the day I place the Pixel on the charger at home, and then use it again the next day. I am getting twelve hours of real use out of this device! For a powerful device like this one, that is wonderful battery performance.

After a month, the spare charger is still in my bag and only used in hotel rooms on trips. I even use the Pixel to charge other devices. With the USB-C cable, purchased separately and described in detail later, the Pixel is a spare battery pack now also. That makes life a lot simpler, as I used to carry a battery pack with me most of the time.

The original Pixel was as good as I can imagine in these areas. This is an obvious reason why they did not change much. The difference in the top row of keys has been discussed in a lot of places. After using the original Pixel as my daily driver, I found the new keyboard took a little adjusting to. I was never able to really put my finger on the difference, but I had a lot of errors my first day or so. I touch type and often very fast, so a slight change can cause a 15 car pile-up in my writing. Now that I am adjusted I have zero problems flying along on the keyboard.

I would argue that the screen, almost identical to the original, is still the best laptop screen money can buy. My partner has the new MBPro–which has an outstanding screen–the Pixel just looks a little better. The only negative with the screen is a side-effect of being a touchscreen. The nice touchscreen finish has quite a bit of glare. I cannot complain too much, it is the same as my Nexus 9 and iPad Mini.

Like the original, this is a lean, clean, high end machine. Personally I prefer the bluer gray of the original but this is an awfully good looking device. Even after two years the design is just coming into its own, not looking dated at all.

After the battery, the USB-C ports are the best new feature on the Pixel. The MBAir made a big splash the week before with its use of a single USB-C port. Much has been made at the limitations of having a single port on a device, and for good reason. I can tell you after a couple months of use that the dual USB-C ports are ideal. It gives you the flexibility to plug power, video, or peripherals to whatever side of the device is convenient. If two power supplies are plugged into the Pixel, it will choose the one that delivers the most best charge. The light bar also orients itself according the side of the device plugged into power.

I posted about this on G+ but the port also allows for an external battery pack to be used to charge the Pixel. I was able to take the Pixel from dead to full charge using 80% of my Anker 25600mAh battery pack. I was also able to then charge the battery pack from the Pixel. The port is quite amazing and has me anxiously awaiting phones and tablets that use it. I doubt it will replace my affinity for wireless charging (Nexus 5, Moto 360), but USB-C is a big improvement over other standards. 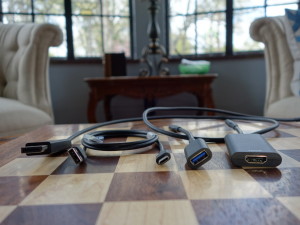 I purchased all of the adapters Google made available. I have had the opportunity to use them all and I am very pleased with the result.

Oddly missing from Google’s store is connection to DB-15 for standard RGB. It is a little surprising to completely ignore what is still a very common connection. Especially in corporate board rooms built over the last 20 years!

It was nice to see that Google learned to supply additional power supplies for those that need them. I wish they had also offered an adapter cable to convert the Original Pixel to a USB-C, I expect there would not be a technical reason this could not happen. It would be a bonus for those of us with multiple power supplies from the Original. 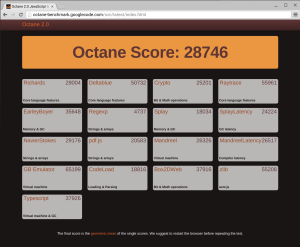 Describing how the new Pixel works for everyday life is far more important than running through a list of hardware bits, ports and features. I would want to know what it is like to use this device in comparison to the original Pixel and other Chrome devices. Well here we go.

Pixel II vs Pixel I

Pixel II vs Chrome Devices (I own Dell, Lenovo, HP, Toshiba, Acer, and Samsung Chromebooks. I also own a Chromebase and an ASUS Chromebox)

As you can see I am quite pleased after using the latest Pixel for the last two months. Like its predecessor, it is a splendidly designed device. It works almost flawlessly and I love the fact that my day is spent working and not waiting on my computer. Using my Mac is now painful, even though I do not use it very much. I believe this device is worth the money if your time is valuable. Let go of the past. Waiting for updates to finish, watching the hourglass or the spinner of doom, fighting viruses, in general using a Mac or Windows machine. If the success in education means anything, it is that the next generation will not tolerate the silliness I describe above. They will want computers that get out of their way and simply work. The Pixel does just that!