“The Affton School Board has set an initial tuition model for the first year of the planned Affton Early Childhood Education Center, opening fall 2012.

A slot in the five-day educational program will cost $625 per month, or $5,937.50 for the nine and a half month school year. Before care and after care will cost $70 and $90 per month, respectively. 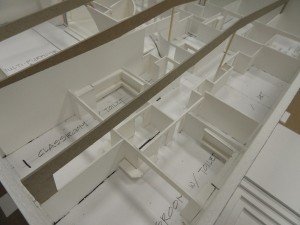 According to a school board memo on BoardDocs, the district will likely offer approximately 72 slots at the ECE.  Slots can be halved to accommodate part-time students, so the actual number of children served will likely be higher.

The precise schedule for the new facility at 9832 Reavis Road, which will host both Affton and Special School District programs, will be largely determined by enrollment.

A fully subscribed program will generate approximately $425,000 in tuition revenue for the school year, the memo said.

Affton’s ECE prices are comparable to other districts in the region with their own early childhood centers. Lindbergh’s new center charges $789 per month. Maplewood charges $615 per month.

District Business Director John Brazeal said the prices set were “dramatically cheaper” than those of private early childhood programs in the Affton area.

The district has also scheduled a groundbreaking for the new facility for 10 a.m. on December 6. The event will be open to the public with a reception afterwards, and will feature eight students at the current St. George building ECE program, digging into sand with Affton Cougar hard hats on.”

Printed in the Affton-Shrewsbury Patch on November 30, 2011