I had the pleasure of attending the 2014 EducationPlus Legislative Breakfast this morning. Most of the school districts in St. Louis were represented along with about 20 Legislators, including the Governor of Missouri, Jay Nixon. I really appreciated how the event was organized and truly focused in on the key issues we face. I would like to talk about the three main thrusts of the morning and share some critical pieces of information. 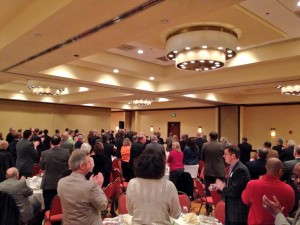 Various school transfer bills are in play right now. There are a lot of challenges surrounding the situation and we heard some passionate comments from the Governor, the Superintendent of Normandy School District and others. The core issue is how to pay for any students that move away from the district in which they live. Ignoring the lunacy of the whole situation, Normandy has been bankrupted by the program, and thankfully it looks like Normandy will receive the additional funds needed to survive. A transfer bill needs to be passed and I am hopeful bipartisan efforts can get it done. A lot of hard work went into the passing of the Senate version of the bill. I am sure much more work will be needed.

This is where the most interesting dialog occurred. In 2005, a Republican dominated state government, clearly supporting public education, passed the current Foundation Formula for funding public schools. A good overview of the law can be found here.

Since the law was passed the formula has not been fully funded by the state. This has left shortfalls in school budgets throughout the state that have been born by the local taxpayers. The Governor, a vocal supporter of public schools, has aggressively advocated for fully funding of the formula. The state of the economy and Missouri’s wise restriction on deficit spending have made this difficult.

The differences in perspective between the governor and the legislature are based on the revenue projections for the state. Much mud slinging can be thrown each direction but the budgets being proposed are based on projections. Because Education is such a large part of the budget, there is no way to avoid it being impacted by budget shortfalls. I sincerely hope the two sides can come together and pass a budget that continues to move us toward fully funding our schools. I do not believe most taxpayers are aware that schools have been dealing with shortfalls since the inception of the new formula.

The last piece of the meeting was, from my perspective, the most beneficial. Each of the tables, around twenty, brainstormed regarding what we would do to support failing or struggling schools. After a healthy discussion at our tables, representatives from each table addressed the assembly regarding the groups’ ideas. Some great ideas were discussed and many were repeated many times. This kind of repetition is good to help us absorb complex ideas and find common ground.

One of the most important ideas discussed was the need for local context in helping a district. Every struggling school or district is not the same. They are very individual with individual needs. Much like education of the child, support of the school needs to happen in the context of the community and the specific issues faced by the residents. Applying a “state” level model to these local issues is preposterous and possibly dangerous.

The solution offered to date is to move students from a struggling school district to ones that are successful. In every part of the state there are schools that are successful and moving forward in positive ways. These schools have a vested interest in their neighbors being successful. In our case Affton (2,500 students) is very concerned about the wellbeing of St. Louis Public Schools (44,000 students). It would be impossible to absorb a large number of transfers if SLPS lose their provisional accreditation.

Many of us believe early intervention into struggling schools is important. The best schools to provide that input are the successful schools around the one that is in trouble. I would suggest that creating an advisory board made up of representatives appointed by neighboring districts would have great insight and community context. Such a group could have a state-appointed member but still be driven locally. Just like the debate around common core is mostly driven by fear of losing local control, local support for struggling schools is vital.

The morning was very beneficial and I know many left energized and better informed. The event was well organized and the comments from all speakers were on target and of value. I would like to specifically thank all the legislators that took their time to come share their ideas, listen to ours, and work to improve education for the children of the state of Missouri.