“It may be iffy semantics to call a ceremony marking the start of renovations to an existing structure a “groundbreaking,” but if there’s a better way to describe eight, hard-hatted, spade-wielding preschoolers and speechifying school officials, let Noah Webster sort it out. 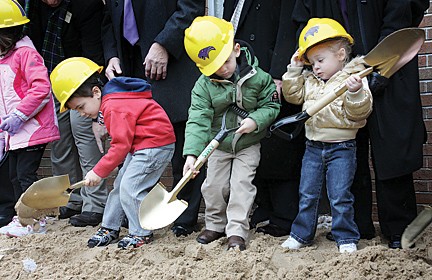 “This building has been well-cared for,” said School Board President Michael McNeil. “It was built in the late 1960s; it’s far from near the end of its useful life. We were fortunate to find a building instead of having to build from scratch, which would have been much more expensive.”

The ECEC price tag is around $2.5 million, paid for by existing district funds.

McNeil told the 50 or so people assembled that the focus of the board has been early childhood education and looking for the right place and right time to “do something right.”

“They have been passionate about it,” he said. “Kids are important. We know that at (the early childhood, birth to 5 years old) stage of life, what goes on in their lives makes a big difference. What we do now will have an impact 20 years later.”

Brotherton said the ECEC will have a positive effect not only on the district, but on Affton as a community.

“This is an investment in the community,” he said. “We are working toward continuous improvement and creating good opportunities for our students.”

Brotherton noted the project is the end result of three months of work by a community-based, board-led committee of about 40 individuals.

“This is really awesome,” said Dawn Chase, whose daughter Carleigh, a current early childhood student, was one of the day’s groundbreakers. “She’s gotten a lot help.”

“This is going to be wonderful for the whole community,” said Nicole Herbst, another district mom. “I actually attended the (old St. George) early childhood center. It is getting old.”

Printed in the South County Times on December 9, 2012